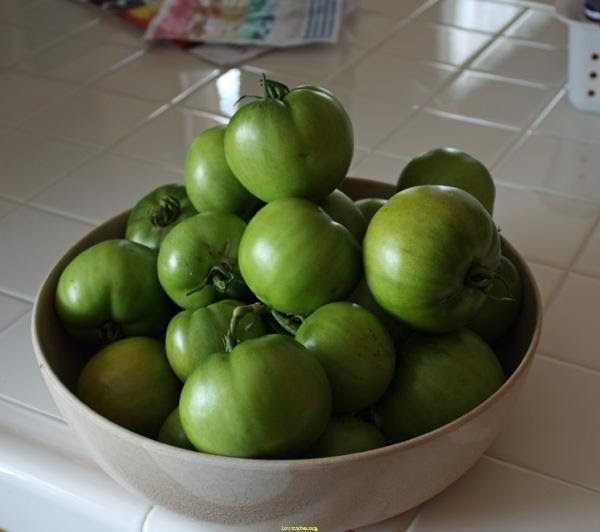 I hate to make my colder weather viewers jealous but I picked all these tomatoes off my tomato plant on December 9th. Some kind person told me to put them in a sunny window and they would ripen. So I put about 8 or so in my window and now, 20 days later, one is nearly ready to eat! The rest are in my pantry, in a bag. They'll get their turn to ripen soon.

My tomato vine is doing better this winter than it did all summer, but it was too cold to ripen the tomatoes. So, I decided to try to just cut it way down, nearly to the ground and I took all the unblemished, unripened fruit off.
at 10:29 AM 2 comments:

Just ran across this article today: Why some continue to eat when full. It basically describes how ghrelin, a hormone connected to eating and appetite, works to keep us eating.

Scientists previously have linked increased levels of ghrelin to intensifying the rewarding or pleasurable feelings one gets from cocaine or alcohol. Dr. Zigman said his team speculated that ghrelin might also increase specific rewarding aspects of eating.

Are we helpless in the face of all this biology working against us? No, we should be able to outwit Mr. Lizard Brain, as I discussed in that posting.

Dr. Mario Perello, postdoctoral researcher in internal medicine and lead author of the current study, said the idea was to determine "why someone who is stuffed from lunch still eats -- and wants to eat -- that high-calorie dessert."

Any over-eater worth their salt already knew about the "dessert box". That's the portion of your stomach that never gets full when presented with delicious things you want to eat. Dinner food is great and all, but I can get full on meat and veggies and not want to eat more. However, the "dessert box" is always empty (or almost always).
at 10:47 AM No comments:

I am enjoying the heck out of my new range.

Anyway, yesterday I found some frozen chicken wings (raw) in the freezer and defrosted them. Actually, I wasn't sure what the heck part of the chicken they were, they were frozen into a solid block. So I defrosted them and saw one of my favorite parts of the chicken, the wing!

Chicken wings
Butter
Louisiana Style Hot Sauce (or whatever your favorite brand is).

Melt some butter, pour in some hot sauce. Coat the wings. Broil them a bit far from the heat source, I use the 2nd from the top rack spot and that worked fine. About 5 minutes, paint on more sauce and flip, another 5 minutes. Paint and flip once more. They should be crispy and browned.

Oh yes, cover your pan with foil for easy clean up!

I like to dip these guys in mayonnaise.
at 10:37 AM No comments:

Since I made a batch of nose-searing mustard I decided it was time to eat a bunch of sausages. I bought some Italian sausages and packaged them up with my food saver. Threw some in the freezer and some in the Sous Vide at 165'. Then they're all cooked and ready to be popped into the microwave for a fast reheat and doused in my lovely mustard. So easy!

Another shortcut to mention is in fermenting things. I keep the house around 68 degrees in the winter which is kind of cool if you're trying to make a batch of Creme Fraiche or kefir. So I put whatever I'm cultivating into a jar and set it in the Sous Vide at 80-86 degrees and it goes much faster than letting it happen at 68 degrees.

Right now I'm trying to resurrect some kefir grains I had dried from several years ago. I'm not sure it's going to work but I got a quart of milk and I'm going to give it a try. My hope is to use it to make some sour dough starter using coconut flour. This is a project I only give a small chance of success, on many levels.

If I were eating yogurt then the SV would be absolutely awesome. Heating the milk to 85c (185f) according to this article about yogurt observed under an electron microscope puts more nubbies (lack of scientific term entirely my fault) on casein molecules which means your yogurt will be thicker and nicer. So, if you're doing Sous Vide, give it a shot! The recommended temperature is 185-194 degrees for 10 minutes. Let it cool, of course, before adding in your starter. Then you could stick it back in the SV for 12 hours or however long you like to culture it, but at 80 degrees or thereabouts.

How to Make Creme Fraiche

I suppose it's cruel of me to mention making creme fraiche and not tell you how I do it. I don't know exactly how authentic this method is but it is what I do, or did rather, I don't use dairy products much any longer. I take about a cup or two of heavy cream and add about 1 Tbl of sour cream, or cultured buttermilk, per cup of cream. Mix well and let it sit until it becomes very thick. This ordinarily takes a few days but in the SV at 80-86 degrees it doesn't take so long. Maybe 24 hours. Refrigerate after it thickens up. It gets even thicker.
at 9:47 AM No comments: